THE CATHOLIC CHURCH JOURNEYING TOWARDS CARE FOR OUR COMMON HOME. Five Years after Laudato Si’

Laudato Si Practise in the Vatican

Solar cells, waste separation, water recycling, electric cars, energy-saving lamps: the Vatican has been doing many things for years to improve the ecological balance in the papal state. The Secretary General of the Governorate, Bishop Fernando Vérgez Alzaga, presented an overview in the Vatican a few days ago.

Not only since Laudato si', the teaching letter of Pope Francis published exactly five years ago, the Vatican wants to orientate itself ecologically. Rather the green turn in the smallest state of the world already began under Francis' predecessor Benedict XVI, to whom the media at that time apostrophized as "green pope".  The beginning was made by the solar cells on the roof of the papal audience hall, explains Bishop Vérgez, they were the first visible sign. The system went into operation in November 2008, a gift from the German company Solarworld, at the time one of the big players in the photovoltaic industry.

"The solar cells produce energy without emitting polluting substances," says the bishop. "This was in line with the goals we had set ourselves to reduce resource consumption. That's why the solar cells in the audience hall were only the first in a whole series." For example, solar cells have long since been producing electricity at the Vatican Observatory in Tucson, Arizona, a branch of the observatory at the Castelgandolfo Papal Summer Residence. This has considerably reduced energy costs as well as carbon emissions, the bishop explains. In the Vatican itself, a solar-powered air conditioning system for the company canteen was launched in 2009.

Light is also a major fixed point in the Vatican's energy consumption. "There is an ongoing renewal of the power systems with LED lights, twilight and the latest generation of sensors that adjust the intensity of light to the fluctuations of natural light," said the Governorate General Secretary. He cites the ceiling of the Sistine Chapel as an example: minus 60 percent electricity costs and greenhouse gas emissions. The new lighting in St. Peter's Square and St. Peter's Basilica has reduced the costs of electricity and greenhouse gas emissions by as much as 80 percent. Incidentally, a German company was at work here too. The traditional Munich-based company Osram lent expertise and regularly sent lighting specialists to the Vatican.

In addition, Vérgez explains, an automatic machine now switches the lights off at the end of the working day. Electrical transformers, which produce a lot of heat in addition to electricity, were taken out of service, particularly at the Vatican's data processing centre, where the state's largest computers are located.

Reforestation in the Vatican Gardens

And the Vatican Gardens? There too, in the green jewel of the papal state, the aim of defending the common house was taken to heart. "With the organic gardens project, for example, in just three years we have succeeded in doing without chemical weedkillers," the bishop reports. "In this way we have given space to biodiversity and now use products of natural origin to eliminate weeds, as well as organic fertilizers".

The nursery has also carried out a census of the plant population - with consequences. "This has led to the reforestation of the State with the planting of 250 new tall trees, where they had been removed over time, and the renewal of about 2,300 hedge plants characteristic of the Vatican Gardens".

The Vatican and water

Also with the topic water, which is dear to the Pope in Laudato si', the Vatican state has reformed itself. The motto is: save water. At present, closed circuits are being set up for the water treatment of the exactly 100 wells in the Vatican Gardens, the same water, incidentally, that feeds the fire-fighting network within the Leonine Walls. Engineers are also currently working on the renewal of the Gardens' irrigation system, which dates back to the years after 1929. Here too, the latest technology is being used, with forms of automation and rational use of water, which also takes account of the weather conditions - "a project that will allow savings of around 60 percent of water resources".

Organic agriculture in Castelgandolfo
A side view on agriculture: Yes, there is also agriculture under papal responsibility - outside Rome, but belonging to the Vatican, in the (former) papal summer residence Castelgandolfo in the Albanian mountains. In a corner of the extensive park around the papal villas, Pope Pius XI had a farm built in the 1930s to ensure the supply of food to the papal court in case of emergency. "Both the cultivation and livestock farming carried out on the farm use systems and techniques that respect the soil and at the same time guarantee products of excellent quality," explains the bishop. 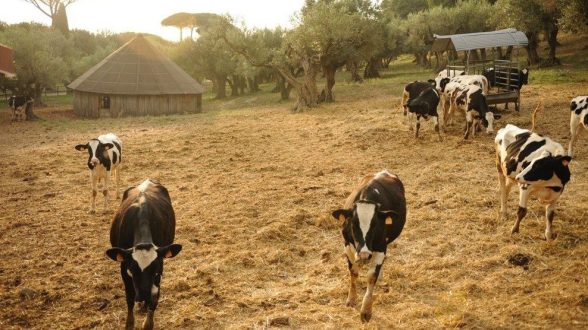 Vatican cars: hybrid drives and e-models
But back to the Vatican City State in the middle of Rome. What is actually the situation there with transport, with the official cars and these things? "Since 2014, the circulation of the vehicles of the governorate's employees within the state is limited," explains Vérgez. "Only those who live more than two kilometers away are allowed to park in the Vatican."
Like other progressive states, the Vatican is increasingly turning to electric cars and hybrid vehicles. In 2018, they started to create battery charging stations, today they are stopping at ten devices with 20 charging points. "The state's fleet of vehicles is also being gradually renewed with electric and hybrid vehicles that can be rented free of charge or rented for government services, as is the case
Translated fom German Text 22.06.20  -Source Vatican News