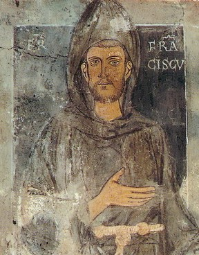 Saint Francis and the Sustainability of the Earth

Praised be You, my Lord,
through our Sister Mother Earth,
who sustains and governs us,
and who produces various fruit
with coloured flowers and herbs.

Saint Francis was the first human on Earth - who has understood the importance of sustainability (sustenta et governato) for our Earth and Life - in the deepest possible sense.

" I do not want to write this Encyclical without turning to that attractive and compelling figure, whose name I took as my guide and inspiration when I was elected Bishop of Rome. I believe that Saint Francis is the example par excellence of care for the vulnerable and of an integral ecology lived out joyfully and authentically. He is the patron saint of all who study and work in the area of ecology, and he is also much loved by non-Christians. He was particularly concerned for God’s creation and for the poor and outcast. He loved, and was deeply loved for his joy, his generous self-giving, his openheartedness. He was a mystic and a pilgrim who lived in simplicity and in wonderful harmony with God, with others, with nature and with himself. He shows us just how inseparable the bond is between concern for nature, justice for the poor, commitment to society, and interior peace.