"For a stable climate only counts what our governments do today, not what they promise for tomorrow."

"EUROSOLAR advocates the goal of replacing non-renewable resources quickly and completely with renewable energy and sees a renewable energy supply as the decisive prerequisite for the preservation of the natural basis of life and for a sustainable economy. Only a decentralized energy supply with 100% renewable energy from wind, sun, water, biomass and geothermal energy can create the basis for other measures, achieve climate stability, and end dependence on fossil and nuclear raw materials and economic cycles. Through the decentralized use of natural potentials and in interaction with storage and other technologies, renewables in the areas of electricity, heat and transport create the basis for a world in which conflicts and wars can be replaced by cooperation and mutual aid (Source Eurosolar).

Faith leaders representing the world’s major religions joined scientists at the Vatican today to call on the international community to raise their ambition and step up their climate action ahead of COP26. Almost 40 faith leaders signed a joint Appeal, which was presented by Pope Francis to COP26 President-Designate, the Rt Hon Alok Sharma, and the Italian Minister for Foreign Affairs, Hon. Luigi Di Maio.

Signatories include high-profile representatives from across the Christian denominations, both Sunni and Shi’a Islam, Judaism, Hinduism, Sikhism, Buddhism, Confucianism, Taoism, Zoroastrianism and Jainism – representing a broad range of faith leaders.

In 2015, in Paris, countries agreed on a framework to limit greenhouse gas emissions.  It’s often called the “Paris Climate Agreement.”  Pope Francis called with Laudato Si the world’s 1.2 billion Catholics to join the fight against climate change. In a papal encyclical letter, Pope Francis declared that the science of climate change is clear and that the Catholic Church views climate change as a moral issue that must be addressed in order to protect the Earth and everyone on it.

In 2015, to achieve the vision of Pope Francis and the Church at the Paris summit, Global Catholic Climate Movement collected nearly 1 million signatures and mobilized 40,000 people to march calling for an ambitious Paris Agreement.

The 2009 United Nations Climate Change Conference in Copenhagen was the first UNFCCC summit in which the climate movement started showing its mobilization power at a large scale. Between 40,000 and 100,000 people attended a march in Copenhagen on December 12 calling for a global agreement on climate.[And activism went beyond Copenhagen, with more than 5,400 rallies and demonstrations took place around the world simultaneously.

Ecumenical Appeal
Based on what we have written in this bishops’ letter, we as the
bishops of the Church of Sweden would like to make the following
appeals…

… to church leaders worldwide, let us:
• through international ecumenism and interfaith cooperation,
endeavour to boost the contribution of churches and religions to
climate justice and climate transition.
• create conditions for good dialogue between our different
spiritual traditions, which help create peace with the earth and
peace on earth.
• contribute to new narratives about what life in a climatefriendly
future could involve, not only materially, but also spiritually
and existentially.
• support the climate transition at all levels through dialogue with
decision makers, joint activities and persistent intercessions.
• contribute in words and actions to a fair and just transformation
of society, so that special consideration is shown to those living
in poverty and vulnerability, to future generations and to
creation, in other words, those whose voices are not heard.
• show through our investing activities that we are leaving fossil
investments and are investing in sustainable solutions.

A Bishops’ Letter About the Climate - The Bishops of the Church of Sweden 2020
The bishops’ letter talks of the climate crisis in a way that has hardly been seen before. It begins with a summary of current knowledge, followed by an existential and theological reflection on threats, anxiety, hope and our role as people. It concludes by describing ways forward and making appeals to decision-makers in Sweden and internationally, to business and organisations, to individuals – and, of course, to the Church of Sweden and churches throughout the world. “The bishops’ letter tackles the worry, the guilt and the questions that climate issues raise. Have we run off and left the bill to our children? How can we achieve climate justice? What can we dare to hope for? The conditions are in place for unleashing the power required for action – among individuals and collect
A Bishop´s Letter About the Climate-Chur[...]
PDF-Dokument [1.6 MB]
Link: The Church of Sweden - Sustainability Investment Portal

LS 23. The climate is a common good, belonging to all and meant for all. At the global level, it is a complex system linked to many of the essential conditions for human life. A very solid scientific consensus indicates that we are presently witnessing a disturbing warming of the climatic system. In recent decades this warming has been accompanied by a constant rise in the sea level and, it would appear, by an increase of extreme weather events, even if a scientifically determinable cause cannot be assigned to each particular phenomenon. Humanity is called to recognize the need for changes of lifestyle, production and consumption, in order to combat this warming or at least the human causes which produce or aggravate it. It is true that there are other factors (such as volcanic activity, variations in the earth’s orbit and axis, the solar cycle), yet a number of scientific studies indicate that most global warming in recent decades is due to the great concentration of greenhouse gases (carbon dioxide, methane, nitrogen oxides and others) released mainly as a result of human activity. As these gases build up in the atmosphere, they hamper the escape of heat produced by sunlight at the earth’s surface. The problem is aggravated by a model of development based on the intensive use of fossil fuels, which is at the heart of the worldwide energy system. Another determining factor has been an increase in changed uses of the soil, principally deforestation for agricultural purposes.

Visit faith for the climate, UK

COP22-Caritas:Expediting the Implementation of UN Climate Agreements A Renewed Focus on the Most Vulnerable
Caritas Internationalis, the Confederation of Caritas organizations worldwide working on emergency relief and integral human development, looks forward to the 22nd Conference of the Parties to the UN Framework Convention on Climate Change (COP22), which will soon convene in Marrakesh. We salute the entry into force of the Paris Agreement on November 4th and we expect the outcomes of COP22 will contribute to sustaining livelihoods, food security, poverty eradication, increasing climate resilience,steady reduction of GHGs, equitable growth and finance, and sustainable development for the most vulnerable.
Caritas-COP22_2016.pdf
PDF-Dokument [432.9 KB]

Final Statement - Laudato si'" and the Path to COP22 in Marrakech - 28.09.2016, Vatican
A year after the publication of Pope Francis’s Encyclical Letter Laudato si’ on “care for our common home”, and nearly a year after the historic agreement called COP 21, there is growing consensus on the urgency of moving forward both courageously and quickly, and, for many, under the guidance of the Encyclical Letter Laudato si’, on the care for our common home.

“We must seek guidance from science, we must seek guidance from economics, but perhaps most importantly we must seek the guidance of our moral compass” (Executive Director of UNFCCC). The Encyclical Letter Laudato si’ “emboldens us with moral authority to take more ambitious actions and accelerate the transition to new models of growth”. With COP 22 scheduled for Marrakesh in mid-November, this is an opportune
Final Statement -Laudato si' and the Pat[...]
PDF-Dokument [380.5 KB] 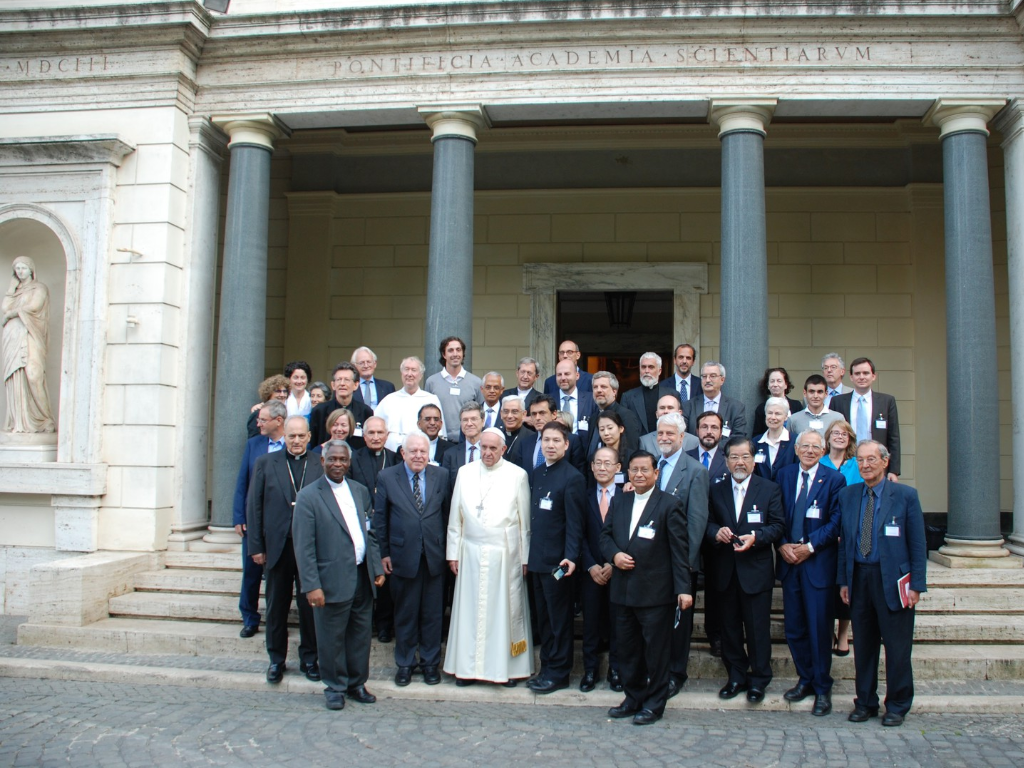 "Laudato si'" and the Path to COP22 in Marrakech

Cardinal Peter K.A. Turkson Holy See High Level Segment of the COP-21
As Pope Francis told world leaders assembled at the United Nations on 25 September last, man is not authorized to abuse the environment, much less to destroy it. When the environment is assaulted, the poor, least able to defend themselves, suffer most. We cannot remain blind to the grave damage done to the planet, nor can we remain indifferent to the plight of the millions of people who most bear the burden of such destruction.
2015.12.08 Card. Turkson full version C[...]
PDF-Dokument [345.5 KB]

APPEAL TO COP 21 NEGOTIATING PARTIES
Ahead of the United Nations Climate Change Conference (COP 21), Cardinal Marx, the President of COMECE, has signed the following appeal issued by Cardinals, Patriarchs and Bishops from across the globe representing the continental groupings of national episcopal conferences.
APPEAL-TO-COP-21engl-final-1.pdf
PDF-Dokument [687.8 KB]