Towards deep ecological awareness and human fraternity on our Earth 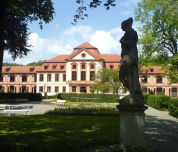 The Saint Francis Academy (FAA) is an academic organization, founded 1995 as a specifically Christian contribution to the European Nature Conservation Year (ENCY 95)  at the Catholic University of Eichstätt-Ingolstadt. Formally the academy is an association of the Christian faithful (CIC Cann. 298) under german law.

The  Academy works on regional, european and global level. In 2020, a comprehensive evaluation and strategy discussion for reorientation an restart took place. Unfortunately, because of Corona, the 2020 Assembly for the 25th anniversary of the foundation had to be cancelled.

The Planetary Health approach is fundamentally not new. The Academy developed an initial prototype for Planetary Health Education at the Catholic University of Eichstätt-Ingolstadt in the 1990s. We understand Planetary Health holistically, in the sense of "integral ecology" as health for the earth deeply interdependet with the health of the the human family.

The Academy is a founding member of the European Christian Environmental Network (ECEN); member of the Laudato Si Movement and the Planetary Health Alliance.

Constitution-Francis of Assisi Academy for the Protection of Earth
Copy of the constitution of association, established and passed in the inauqural meeting on the 23 of may, 1995 in the Katholische Universität Eichstätt, lecture hall A, room 102 .
Constitution+of+the+Francis+of+Assisi+Ac[...]
PDF-Dokument [130.5 KB]