"God, the Almighty, has no need to be defended by anyone and does not want his name to be used to terrorize people." 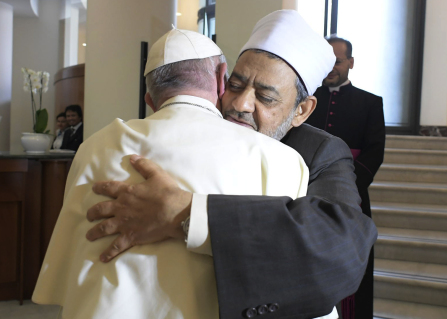 285. In my fraternal meeting, which I gladly recall, with the Grand Imam Ahmad Al-Tayyeb, “we resolutely [declared] that religions must never incite war, hateful attitudes, hostility and extremism, nor must they incite violence or the shedding of blood. These tragic realities are the consequence of a deviation from religious teachings. They result from a political manipulation of religions and from interpretations made by religious groups who, in the course of history, have taken advantage of the power of religious sentiment in the hearts of men and women…

God, the Almighty, has no need to be defended by anyone and does not want his name to be used to terrorize people”.[284]

For this reason I would like to reiterate here the appeal for peace, justice and fraternity that we made together:

In the name of God, who has created all human beings equal in rights, duties and dignity, and who has called them to live together as brothers and sisters, to fill the earth and make known the values of goodness, love and peace;

In the name of the poor, the destitute, the marginalized and those most in need, whom God has commanded us to help as a duty required of all persons, especially the wealthy and those of means;

In the name of orphans, widows, refugees and those exiled from their homes and their countries; in the name of all victims of wars, persecution and injustice; in the name of the weak, those who live in fear, prisoners of war and those tortured in any part of the world, without distinction;

In the name of peoples who have lost their security, peace and the possibility of living together, becoming victims of destruction, calamity and war;

In the name of human fraternity, that embraces all human beings, unites them and renders them equal;

In the name of this fraternity torn apart by policies of extremism and division, by systems of unrestrained profit or by hateful ideological tendencies that manipulate the actions and the future of men and women;

In the name of freedom, that God has given to all human beings, creating them free and setting them apart by this gift;

“In the name of justice and mercy, the foundations of prosperity and the cornerstone of faith;

In the name of all persons of goodwill present in every part of the world;

In the name of God and of everything stated thus far, [we] declare the adoption of a culture of dialogue as the path; mutual cooperation as the code of conduct; reciprocal understanding as the method and standard”.[285]