Day and Season of Creation 2022

What is the Season of Creation ?

Pope Francis invites you to this Season of Creation, will you join?

The Catholic community participate in the Season of Creation 2020

Ecumenical Patriarch Bartholomew's Message for the World Day of Prayer for the Care of Creation 2020
The Ecumenical Patriarch of Constantinople, Bartholomew I, has issued a message to Orthodox bishops and faithful, calling for a renewed commitment to protecting the environment.In the face of the grave challenges of the environmental crisis, faith in Christ can help us not only see the problems with the current culture, but also help us to see the “possibilities and prospects of contemporary civilization.” Bartholomew calls especially on “Orthodox young men and women to realize the significance of living as faithful Christians and contemporary people,” adding, “Faith in the eternal destiny of man strengthens our witness in the world.” 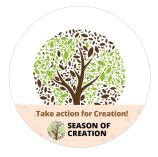 The concern for the common house today unites all 2.2 billion Christians and churches worldwide. For the first time in church history there is an ecumenical time in the church year for all churches.

GOD is with us Song (Egyptian Night of Prayer, Cave Church Cairo, Monastery of Saint Simon)

In 1989 the Ecumenical Patriarch of Constantinople Dimitrios invited "the whole Orthodox and Christian world" to pray on 1 September "to the Creator of the world: with thanksgiving for the great gift of the created world and with supplications for its protection and salvation". This initiative was welcomed and adopted by the whole Orthodox Church in 1992.

At the same time, the ecumenical discourse of the time included questions about the integrity of creation, peace and justice, and many Christians were already committed to the conciliar process. Part of this process were the European ecumenical assemblies in Basel (1989), Graz (1997) and Sibiu (2007).

Since 1996 the churches, especially in Europe, have been working intensively on the care of creation. The initiative of the Ecumenical Patriarch was taken up both in Graz and in Sibiu. The message of the 3rd European Ecumenical Assembly in Sibiu recommends a time for creation: "We recommend that the period between 1 September and 4 October be dedicated to prayer for the protection of creation and the promotion of a sustainable lifestyle to halt climate change".